Fab, fab, fab! I loved this book! It was modern, sassy, funny and romantic – absolutely spot on. A fan of Fiona Walker for many years, I enjoyed many of her early books immensely, my first being ‘Snap Happy’ which I couldn’t put down. However, I felt she wavered a little in some of her later Cotswold-based books and lost me for a while. She returns with interest!
Jenny, a divorced teacher, spends her school holidays house-sitting for other people, on this occasion taking on a large house complete with madly neurotic dog, for writers who are heading to the Maldives in an attempt to patch up their shaky marriage. While there, we are entertained with numerous mishaps generally revolving around the untrained dog Gunter and his steady destruction of house and ‘dog car’. The romantic element doesn’t appear for some time while Fiona Walker skillfully creates her main female character. Sensitive, compassionate, hurt, full of self doubt – yet fighting back against the blows that life has dealt her with strength and determination, she is an entirely likeable character who I think most female readers will relate to.
Jenny is already in a chaste relationship with Roger, a predictable, safe and ‘nice’ man who it transpires, hides some secrets of his own with hilarious results! Euan, the real romantic interest who appears on the scene later on the book, is a classic, yet modernised romantic lead, the complete opposite of Roger, passionate and brooding, a painter full of creativity, smoking and drinking his way through life, with a chequered past full of naked woman he has painted and slept with. The unlikely pairing of Jenny and Euan gradually comes together through a series of misunderstandings over the course of a week, always nearly, but never quite consummating their growing lust and love, frustrated by emerging secrets and pasts revisited in the form of Euan’s ex-lover and Jenny’s ex-husband. To say any more would be to spoil the story for readers, other than to say they are in for a real treat of a read!
I highly recommend ‘The Woman Who Fell In Love For A Week’ and rate it five out of five stars. 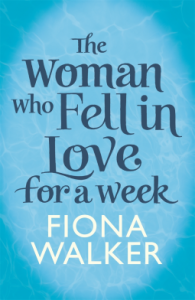