What a refreshing change! An informative book that celebrates the positive side of ADHD rather than the problems it MAY cause in life. The fact is that many people with ADHD are actually undiagnosed, unmedicated and successfully navigate their way through life if they manage to find a route that suits them; for others, myself included, diagnosis fills in a lot of gaps and enables one to see where changes need to be made – but again doesn’t render them incapable! And for many, such as my own 11 year old son, harness the powers of ADHD creatively, and it is amazing what one can achieve!
I will use my son as an example in this review because for me, the book was about him! He was medicated for a short period while we learned how to manage he and his 13 year old brother with Asperger’s Syndrome within the same household (a volatile mix!) During the time he was medicated his teachers informed us that he had lost his sparkle and lust for life. He is now unmedicated and I wouldn’t have it any other way. He is now managed almost entirely through sport; at 9, as Captain, he took his under 10s hockey team to regionals and they came runner’s up; at 8 he came first in his first ever triathlon, then ran around again to support his brother before coming third in a skateboarding competition that very same afternoon! He is already sponsored by a skateboarding retail company; he has recently mastered an 8 foot gap jump on his mountain bike before his dad did, and was the first to be allowed to backflip unaided in his gymnastics class. He was elected as Sports Ambassador in his final year at Primary School and has embraced this role with his usual energy and infectious enthusiasm. His sense of fun, his humour and his active willingness to try something new are harnessed by us, his parents, positively and safely – the world is his oyster, and sports coaches have often told us to look out for him in the sports world in years to come. I could go on, but I think I have made myself clear.
The stereotypical male with ADHD is apparently naughty, disruptive and disrespectful. Really??? My son was once challenged, ‘Aren’t people with ADHD naughty?’ He replied, ‘There is no N is ADHD.’
Without his ADHD he wouldn’t be the amazing little boy he is and Dr Dale Archer focuses his own energy into writing a book emphasizing how this can apply to most people with the ADHD difference.
Not only do I fully support his stand, but the book is written in short chapter/section bursts which cater for the rushing ADHD mind.
An intelligent, knowledgable and thought-provoking read from someone that knows! Sceptics, read and take note!
I give this book 4 out of 5 stars. 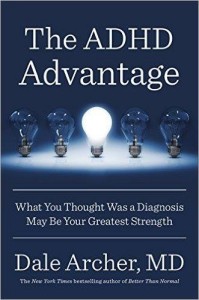