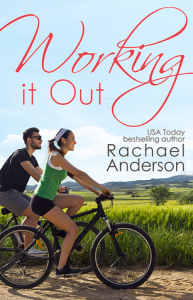 The cover of ‘Working It Out’ didn’t inspire me, however, it was a poor reflection of the story which turned out to be much more interesting. Basically a traditional ‘boy meets girl’ love story with the girl playing hard to get, the book is given a modern twist with the introduction of extreme sports enthusiast, Seth Tuttle, the male lead and love interest. Seth is heavily into mountain biking, heli skiing, sky diving – and any other sport through which he can claim the adrenalin rush he loves. The female lead, Grace Warren, in contrast to Seth, likes a much safer life, mainly as a result of living with the guilt of a skiing trip with her brother which resulted in a serious and permanent disability for her sibling who is now wheelchair bound. Furthermore, as a committed Occupational Therapist at the local hospital, Grace regularly deals with the rehabilitation of extreme sports’ injuries, including Seth’s while skiing, which is how their paths finally cross.

The growing attraction between Seth and Grace is skilfully handled by the author, and in parts I must confess I even held my breath, the tension was so great! The reader’s sympathies are very much for Seth and Grace getting together.

I was however a little disappointed at the clichéd collapse of Grace’s barriers, simultaneous with Seth’s decision to back off, and the subsequent misunderstanding between them. I feel that the author wasn’t truly committed to this section of the book as it petered out without too much exploration and I feel that it didn’t really have a place there.

I enjoyed ‘Working It Out’ very much. The characters were very modern, with an interesting dilemma juxtaposing safety in life and love represented by Grace, with the risk-taking spontaneity of Seth, and how the two could reconcile their differences and be together without losing their own ideals and identities in the process. I could relate closely to these characters (as I’m sure many current readers could), which added substantially to my reading experience.

I give ‘Working It Out’ by Rachael Anderson, three and a half stars out of five.