What a brave book this is, and how skillfully Rowan Coleman handles her subject matter to make what had the potential to be a very depressing book into a thought provoking, sensitive and poignant story.
Set in a hospice, Stella is the caring nurse who provides a final voice for the dying in their last dictated letter, the words which might otherwise go unsaid, and all worth that final ‘hurrah!’ that she offers. The letters reveal a husband who has hidden a substantial amount of money won in a lucky gamble which he bequeaths to his widow; a couple indulging in a purely platonic affair while married to other people who meet just once a year and might not otherwise know the other had passed on; a mother who gave her child up for adoption at birth…and many others. It serves to emphasise the colourful lives that exist behind each and every one of us, the stories that are hidden inside people which might never be revealed without people like Stella.
Meanwhile Stella fights her own battle at home in which she desperately tries to recover her once loving relationship with her damaged husband, injured both physically and mentally in an ambush in Afghanistan and living with the guilt that he couldn’t rescue his friend and colleague.
We also meet the ironically named Hope, the survivor of a rehabilitation stay at the hospice who is so scared of loss that she cannot look at life outside herself and nearly misses her chance at love and happiness as a result.
Finally there is Hugh, the eccentric loner who lives with the dead in life, the recipient of one of Stella’s letters who life we are given a much deeper insight into and who pulls the strands of the story together.
I wanted to read this book very much having read and enjoyed ‘The Memory Book’ very recently, but as I started first few pages I wasn’t too sure how far I was going to get as the mixture of letters format and prose interspersed with the changing voice of the narrating character seemed a little confusing. However, the characters were so real I became thoroughly absorbed in their lives and ended up giving it 4 stars out of 5. 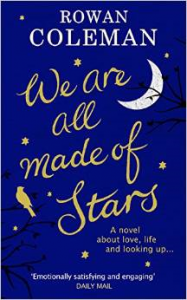