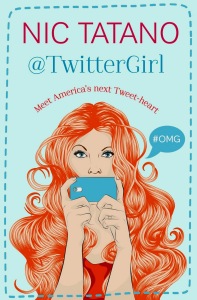 My initial thoughts on ‘Twitter Girl’ centred around previous books I had read in a diary or email format such as Bridget Jones Diary, and similar. Here was one I hadn’t come across – a book based around Twitter. Could a story be written around a medium using just 140 characters per post? Personally, I have never really ‘got’ Twitter, so I was intrigued.

Further initial thoughts were based on assumptions regarding the front cover illustration and yes, even the author’s name. The fluffy haired female holding her mobile phone, and the author’s name Nic, (which I wrongly assumed was short for Nicola), placed ‘Twitter Girl’, firmly in the Chick Lit camp. I must admit that the cover did put me off just a little, with the jacket blurb reinforcing the feeling that the intended Chick Lit audience must surely be a more frivolous twenty years younger than my forty-something-married-mother-of-two-with-mortgage-to-pay, however, the thought of all that tweeting lured me in.

It amazes me how we begin to form an opinion before the first page is even turned!

But perversely, it was the very fact that my expectations were not met that kept me reading!

I immediately accepted the fact that the Twitter feeds did not dominate the book, but that the format was a much more traditional chapter layout with Tweets starting and interspersed throughout each chapter, enabling the progress of the story to develop around them.

Usually I would find out a little about an author before reading their work, but in this case I was keen to get started and dove straight into the book without further ado, armed as I was with my initial belief that I was reading the work of a female author. I have been an avid reader for many years of such Chick Lit royalty as Jane Green, Marian Keyes, Sophie Kinsella and Fiona Walker to name a few, and as I began to read, the stereotype didn’t quite fit. The main character, Cassidy Shea, and her friend Ripley, were much more imposing, brassier, sassier, sharper and more street-wise than the often ditsy, absent-minded, self-deprecating characters of much of this genre – and certainly more predatory in their appreciation of the good-looking men they were surrounded by! It was a refreshing change; I admired them, and it was only with the realisation that Nic was in fact a male author, that I realised that perhaps this was the key – a refreshingly different account of female characterisation from a male perspective within the female-dominated genre of Chick Lit.

The story is written in the first person perspective enabling lots of fast-paced, snappy, fun dialogue – and in the opinion of this English reader, it gives a real flavour of America. ‘Twitter Girl’ is based in New York and the language used, the expressions and colloquialisms locate you firmly there. For example, words like ‘snarky’, not a familiar word across the globe in the UK, but the perfect word to describe Cassidy’s style; you cannot doubt its meaning.

The actual plot was in my opinion, a little too predictable, despite its political content and ‘snarky’ Tweets. I thoroughly enjoyed this small insight into the life of a Senator hoping to run for President, albeit fictional, and the disruption it courses in his personal life; however, the love interests and relationships which made up a large part of the plot, were I felt a little too obvious virtually from page one, to the detriment I feel, of the book as a whole package.

I’m not sure ‘Twitter Girl’ fits too snugly into the mail box labelled Chick Lit. The characters themselves are larger-than-life, if under-developed female leads, in a predictable, but pacey love story with a political edge. There are a couple of glaring editorial errors which made me gasp (well, I am British!); for example I’m not sure how Prince William would feel if his Uncle, Prince Andrew, made off with his then-fiancée Kate!*1  This one wouldn’t have required a great deal of research and editing, and indeed towards the end of the book we see that Prince William has been reunited with his fiancée! *2

Overall I enjoyed ‘Twitter Girl’. The pace and dialogue grabbed me, the strong female leads intrigued me (perhaps because of, rather than in spite of, not identifying with them personally), and although not an obvious page turner (maybe my age didn’t quite fit the intended audience?), ‘Twitter Girl’ did hold my attention to the end.

Rating: I give it a solid three out of five stars

*2. ‘The public followed the romance like the Brits rooted for Prince William and Kate Middleton.’ (Chapter 26)